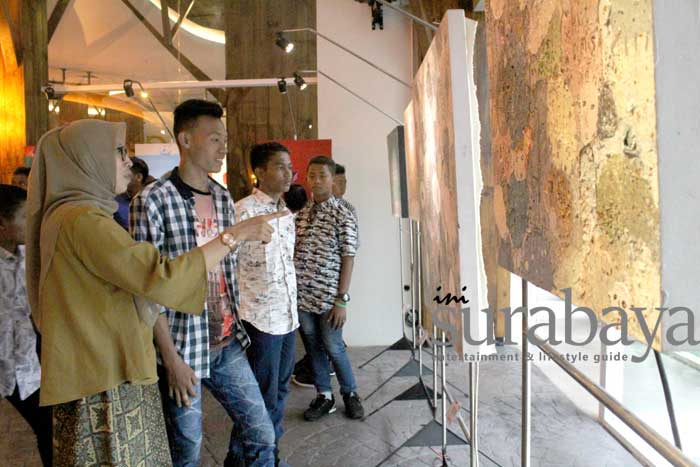 Through this art exhibition, ‘Surabaya Insight’, these kids had proven to people that they can create a high-value masterpiece even though they don’t have a normal life like their kids age.

There are paintings in various objects which are sold for 2 million to 7,5 million rupiah. There are even higher priced paintings such as, ‘Ragamnesia’ by M. Yusuf and ‘Kebunku’ by Neneng which both have the same size of 145×145 cm paintings and worth for 15 million rupiah.

The largest painting is titled ‘Mallaby de Auto’, this 270×135 cm painting which worth for 30 million rupiah is a painting of General Mallaby’s wrecked car during the surge on November 10th, 1945.

On the red side of the painting, there was a writing ‘Merdeka Ataoe Mati’ (Freedom or Death), whilst the car is painted on the white side with ‘Once and Forever’ written on a board on top of the car.

An interesting part of this painting is the painters, there are three names mentioned, Rajes, Rizky and Syahrul. A painting which

“We worked on it alternately. Some of us did the sketch, the rest did the painting,” uttered M. Rajesh Ramdhany.

Erni Lutfia, the head of Regional Technical Implementation Unit (UPTD) of Kampung Anak Negeri (Village Children Affairs ) said that those kids are having different kinds of background. Village children affairs children, according to Erni, are kids who were raised in a broken home family.

“They mostly are neglected by their parents because of the divorcing or whose father is in jail while their mother is working as a female migrant worker,” she said.

Meanwhile kids who live in social shelter in Kalijudan are the kids with special needs. “But they are also getting the same extracurricular such as painting, painting batik or music. These kids are also able to join sports events like boxing, bike race, tapak suci (Indonesian traditional martial arts) and also cell phone repairment,” she explained.

This painting exhibition is not the first time for these kids. “Beside joining the local level in Surabaya, they have also joined such exhibition in national level,” she confirmed.  sum